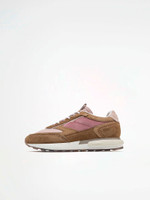 Tribe Collection:  Lost in the furthest and deepest jungles of the Earth, or in the distant and immense plains of Africa. Small groups of people whose customs, clothing, and traditions are the image of a bygone era. A sneaker that goes back to the roots to reinvent footwear. Origins are original.

Kalahari is derived from the Tswana word Kgala, meaning "the great thirst", or Kgalagadi, meaning "a waterless place”. Tribes like Bushmen, San people, Bantu, and the famous Himba women, among others live in this extreme yet incomparable land.

Rapa Nui: The most remote civilization in the world with an enigmatic past that’s yet to be fully unlocked, Rapa Nui is a beautiful island filled with mystery and magic. Historians have spent decades trying to understand the culture of the island and decipher the meaning behind the giant moai statues built by the early Rapa Nui people.

Java: Javanese people have been influenced by more than a millennium of interactions between the tradition Kejawen and the Indian Hindu—Buddhist . Their heritage has created the largest temples in the world like Prambanan and Borobudur.

Samoa: The islands of Samoa are home to the largest concentration of  full-blooded Polynesians in the world. Today, many Samoans live and work  abroad, mainly in New Zealand, Australia, Hawaii and California.

Himalaya: The Champa, Ladakhi, Balti, and Dard peoples live north of the Great  Himalaya Range in the Kashmir Himalayas. They include the Newar, the Tamang, the Gurung, the Magar, the Sherpa, and others.